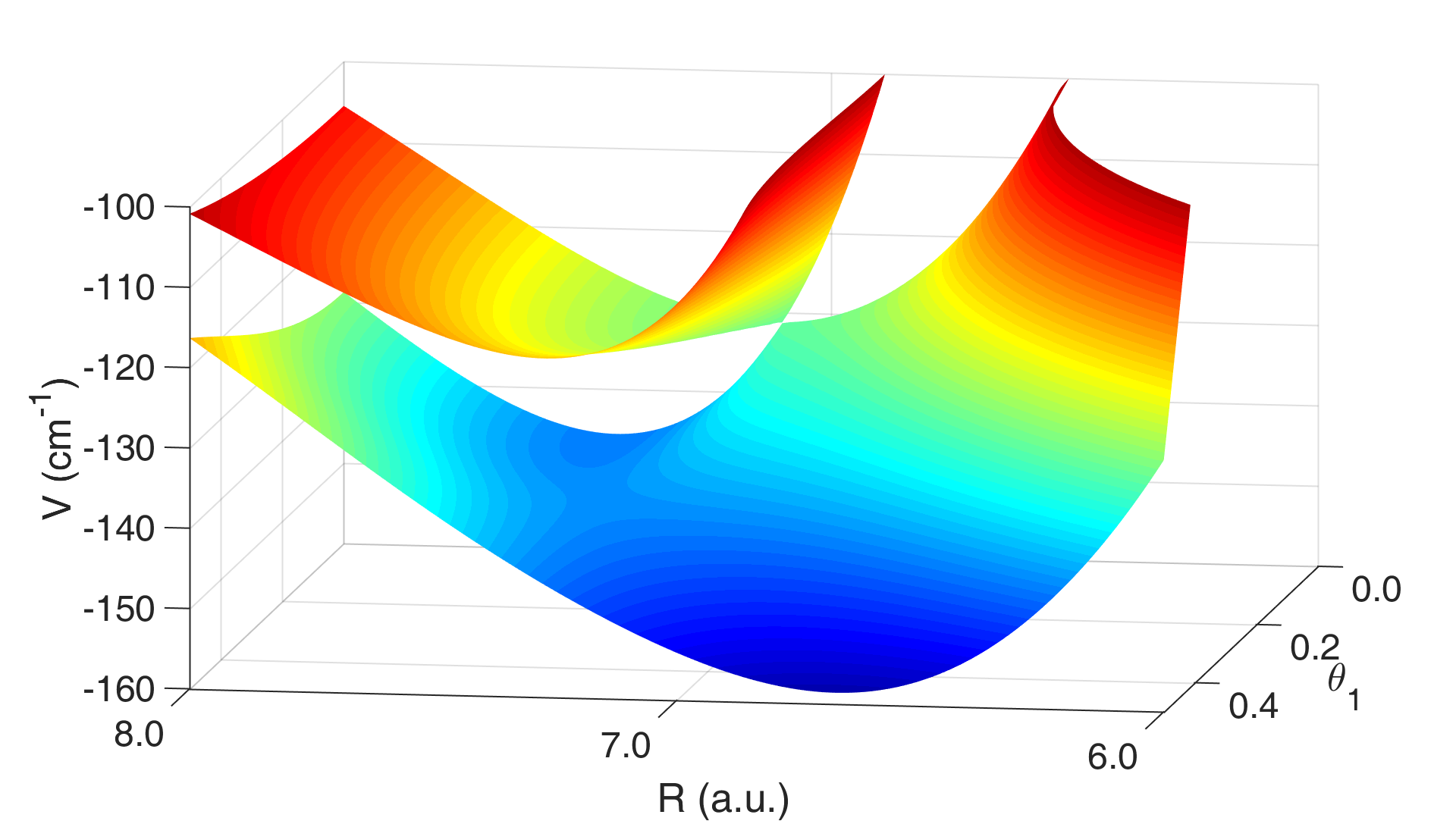 Figure: Conical intersection in the entrance channel of the F+CH4 reaction.

During the advent of modern quantum theory in the 1920’s, the famous physicist P. M. Dirac claimed: “The fundamental laws necessary for the mathematical treatment of a large part of physics and the whole of chemistry are thus completely known, and the difficulty lies only in the fact that application of these laws leads to equations that are too complex to be solved.  It therefore becomes desirable that approximate practical methods of applying quantum mechanics should be developed, which can lead to an explanation of the main features of complex atomic systems without too much computation.” A century of development of theoretical and computational methods and the power of modern computer opens up a perspective Dirac could not have imagined. Today, chemical reactions can be theoretically described by large-scale numerical simulations based on rigorous first principle theory. In silico chemistry is becoming a reality. Enabling first principle theory for increasingly complex chemical systems is the challenge which the present project tries to address.

Specifically, the project focuses on the accurate first principle description of elementary reaction processes. While a fully quantum state-resolved level of understanding has been achieved for triatomic and selected tetratomic reactions, extending this level of understanding towards reactions involving a larger number of atoms is a challenging subject. Reactions of methane with atoms such as H, Cl, O, or F are prototypical examples extensively studied by fundamental research focusing on the detailed understanding of chemical reactivity. Furthermore, these reactions are important processes in atmospheric and combustion chemistry.

Crossed molecular beam techniques, awarded the 1986 Nobel Prize in chemistry, facilitate experimental studies of elementary chemical reactions at the level of quantum state resolution. Two collimated beams of dilute gas-phase atoms or molecules are prepared in selected quantum states and intersect in a vacuum chamber so that individual reactive collisions can be detected. The direction and velocity of the resulting scattered products are measured to provide information about the partitioning of energy among different quantum states of the product molecules. Modern experiments studying reactions of methane with different atoms yielded impressive results, highlighting the complexity of polyatomic reaction dynamics at a quantum state-resolved level. Reactive resonance in the Cl+CH4 reaction [1] or a counterintuitive mode-selective chemistry in F+CHD3→HF+CD3/DH+CHD2 reaction [2] are prominent examples.

While impressive progress has been achieved in experimental studies, the accurate theoretical description of the reactions with methane is still a challenging task. Detailed wave packet dynamics calculations studying reactions of methane with Cl or F atom had to rely on reduced dimensional models considering up to eight active coordinates. Only the reaction of methane with the H atom could be studied in full dimensionality [3]. These calculations relied on the multi-configurational time-dependent Hartree (MCTDH) approach [4], which facilitates numerically efficient high-dimensional wave packet dynamics calculations.

All high-level calculations described above rely on the Born-Oppenheimer (BO) approximation. The reaction is described as a collective motion of all nuclei on a multi-dimensional landscape given by a single adiabatic potential energy surface (PES). Non-adiabatic transitions between different electronic states cannot be described in this approximation. However, atoms such as F and Cl show electronically degenerate ground states due to the presence of incompletely filled p orbitals, and the reaction of methane with F(2P) or Cl(2P) atoms occurs on coupled conically intersecting PESs. Rigorous theory therefore has to explicitly consider non-adiabatic electronic transitions in these reactions. Accurate coupled diabatic PESs describing the F(2P)/Cl(2P)+CH4 reactions have recently been developed.5