Prof. Dr. Burkhard Monien received the Badge of Honor of the North Rhine-Westphalian Academy of Sciences, Humanities and the Arts.

We are pleased to announce that Prof. Dr. Burkhard Monien – founder of the Paderborn Center for Parallel Computing, emeritus Professor of Computer Science, and Gottfried Wilhelm Leibnitz Award Laureate – has received another great honor. On May 15, Prof. Monien has been awarded the Badge of Honor of the North Rhine-Westphalian Academy of Sciences, Humanities and the Arts. This Badge of Honor has been recently introduced to award distinguished members for their outstanding engagement for the academy. “It is already a great honor for me to be a member of the academy. But the award of the Badge of Honor by the academy is truly impressive,” says Prof. Monien. He has been a member of the academy since 1996 and was the first computer scientist elected to the academy, which unites leading researchers in the state of North Rhine-Westphalia.

The academy is organized into three scientific and scholarly classes and one class of the arts. The Badge of Honor has only been awarded twice before. This year, four additional members have been awarded, one per class. “Receiving this honor as the first scientist in the class of Engineering and Economic Sciences is something very special, considering the large number of excellent researchers in my class,” states the awardee Prof. Monien proudly.

Prof. Monien has been a professor of Computer Science at Paderborn University since 1977. At that time, he was the first tenured professor of Computer Science at the Department of Mathematics and laid the foundation for today’s profile of the University. For over 20 years, his main research area was the theory of parallel computers and their applications in practical and applied computer science. During this time, he also founded the Paderborn Center for Parallel Computing (PC2) and was instrumental in the foundation of the Heinz-Nixdorf Institute. Later, he focused his research on algorithmic game theory, a field in theoretical computer science where he is widely recognized as one of the leading researchers in Europe. 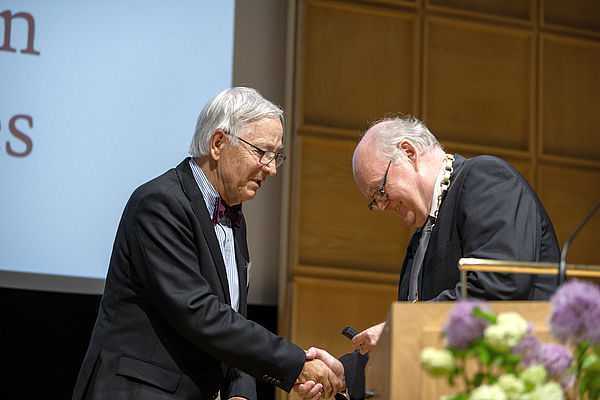